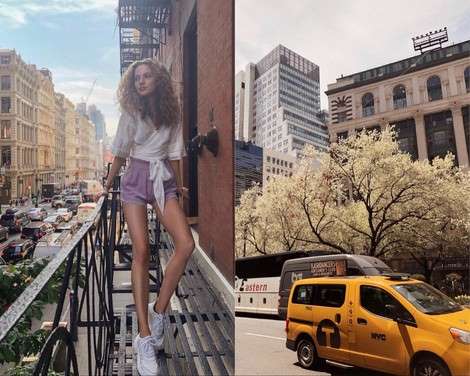 22-year-old model Tanya Kizko lives and works in New-York for more than a year. But in the meantime she has concluded a head-spinning contract with Russian agency “Avant” and with American one – “Ford”. She was shot in loud ad campaign “Juicy Couture”, broke out on the cover of American slick magazines and participated in fashion shows of Elie Saab, Bottega Veneta and Jonathan Simkhai.

– How did you become a model?

– I had very long and strange start-up way in a model business. When I was 16 I was offered this job but parents turned out to be strictly against of this idea. Myself then I didn’t believed in the moon that agencies were promising to me. It sounded too much incredible. Eventually I joined the uni in Kharkov and thought that I was doing right… And boom!!! You know, there are such moments when it suddenly occurs to you that you turned into the wrong path and not that kinda happy for my choice. And I decided – if not try modelling, I will regret about this till the rest of my life.

I was sent to my first model trip only when I was 20, that is rather late if to judge by industry. But better late than never! Now I am 22, I rather swiftly moved to New-York – thanks for that to my beloved parent agency “Avant”. I am living in here already for more than a year. It strikes me that I feel myself at home from the first very days and not even once regreted about my choice. Btw I obtained the diploma! I am engineer  of computer-integrated technologies.

-Is it often that models all together rent a flat, where do you live?

-For a long time I lived in apartments for models of my Ford agency. And not even once I faced the reality of “annoying fellow residents”.  Maybe I am just lucky. Now I am living with my boyfriend, with who I got acquainted in New-York. This city gave me a lot.

– How your ordinary day is planned?

– I love my job for the fact that I have not got the “ordinary day”. Each day there castings, shootings… Obligatory trying hard to go for workout, walk with my dog and meet with my friends.

-How much money should a model earn to live in New-York being  well-off?

-I keep to the point of view that money are never enough, each year the needs are growing. I am not rather wishing to tell about my income not to have evil eye on me.

– Where did you spend your first fee?

-I haven’t spent it, put it off for the flat.

-What are the pros and contras of being a model in New-York?

I think that there are many girls, which do not share my gratitude to America. Many of them work in Europe and not even think of the moving to USA. But having worked both there and there I can say that in USA it is possible to earn more money. And I can’t even make up at least one reason why America is worse than Europe.

-What is the difference between Russian and American agents?

-Only that they are talking different languages. (Laughing.)

-How many years for the contracts with models are concluded? Why they can expel you?

Unless you are a good employee the contract will be constantly prolongated. What about expel – I think they can do it for inappropriate behaving or if you are for a long time not in good shape.