The artist depicts Jesus Christ on the walls throughout Russia. He has brain cancer.

Holy faces of Jesus in the form of graffiti appear on the streets of Russian cities for already 6 years. Their author doesn’t serve in the Russian Orthodox Church and doesn’t consider himself the opposition, he is “outside” church. 28 year old boy told us his story. 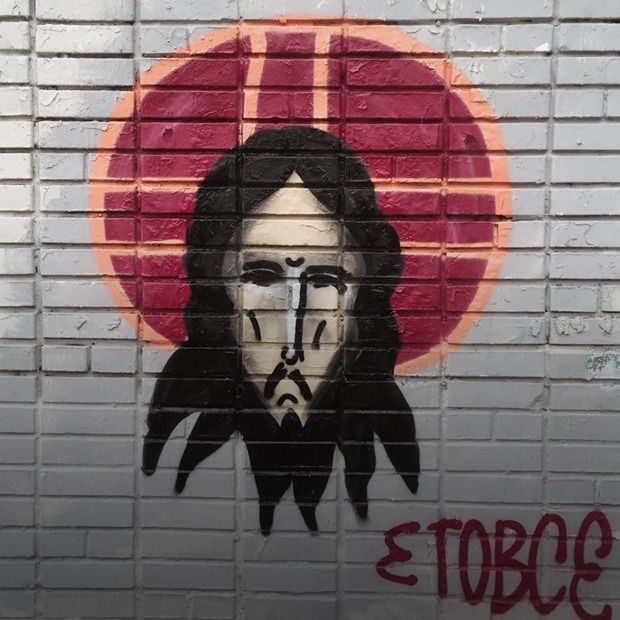 “Once I scrambled in the forest with drunk deacon. We were at the marriage and he said that my pictures – blasphemy, and I told him that it is arts. It occurred that we tussled. I claim my rights for a wall in the city and priests for some reason claim the rights for God.  All my Jesuses are different. Conventionally: you scoff LSD and paint somehow different. The easiest element is nimb. The picturing is not only fine motor skills, it is dance. I can depict Christ for a minute, without a sketch, until red at traffic light, – as far as it is necessary to be in time until whatever granny starts scolding that it is a sin. Gradually nimbs began to appear super even, the hand learned itself to make ideal rounds – now I deliberately paint them curve.

On the first course year there was a first epileptic attack and the first coma, when I was 18. Doctors found brain tumor in me, which can blow out at any moment. They said I have 3 more years maximum. I am a native of Moscow, was brought up in big orthodox family, went to parochial school and after went for pediatrist. Af first, mother cured me with holy water, oils and homeopathy. When I understood that I die soon, started taking drugs. I crashed out from Christian and pious world to the world full of debauch, dirt and women: I remember how I woke up in the middle of nowhere and it is not known with who. My friend appeared to be professional con man and we began to earn by shady deals, about which I don’t want to tell. But I never lost the feeling of God even at these moments. If a man is indignant with Jesus on the street, it means that one watches him too often. The chair shall be standing before table and Jesus shall be only in church and no other way. I draw Jesus not as a protest against orthodoxy but to change people. When my works gained popularity, strangers started writing to me – in one clause often were words “God, burn in hell, perish, creep”. People live in the limited world, where everything has to go by the rule.

For most people God is a mean, code for gaining worldly possessions, the way to break the laws of physics, which were invented by God Himself. “I have a problem with something, it is necessary to read a spell, to pray, perform a ritual – and everything will go well”. For me God – is unreachable goal, the sense of humanbeing. It is not necessary to pray to Him, He has to be studied”. 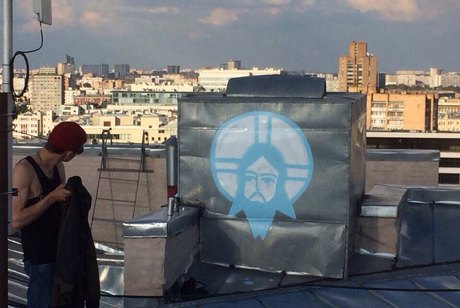